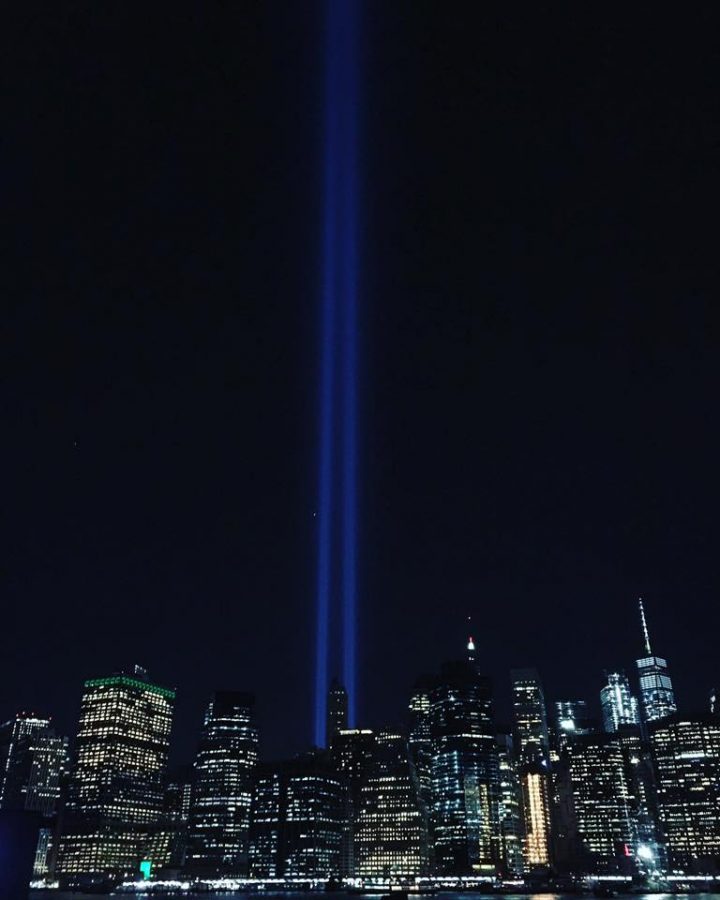 The Tribute in Light shines from just south of the former site of the World Trade Center in New York City in remembrance of the terror attacks on Sept. 11, 2001. The two beams of light, which are created by 88 searchlights, represent the Twin Towers. The lights shine every year and are produced by the Municipal Art Society of New York. Photo courtesy of Nhu-Y Ngo (LHS class of 2005)

September 11th brings thoughts of terror and destruction to the minds of almost everyone in the United States. Even if you were not alive when the terrorist attack took place, as most of us weren’t, the stories and videos can haunt you. This is true for many people at Lincoln High. Most people who were alive at the time can remember exactly what they were doing and where they were when they found out that planes had crashed into the World Trade Center. The thing that sticks with people the most is “The photos of people running through the streets of NYC with a giant cloud of debris behind them.” (Quote from Sarah Knight, a teacher here at Lincoln High).

On September 11th, 2001, almost 3,000 people assumed it would be a normal day. Little did they know that it would be their last day. This should have never happened. At 8:45 a.m. a 767 airplane crashed into the north tower of The World Trade Center in New York City. This collision killed hundreds of people on contacted and left many people that were above the floor that the jet had collided with stranded inside the building. Most of the people in surrounding areas thought it was just a jet losing control, but when another plane hit the south tower only eighteen minutes later most residents realized that this was deliberate. This crash spit debris all over the city of New York and killed hundreds more that were inside the tower. Shortly after these crashes, a jet struck the Pentagon, and more than one hundred people were killed during this strike. The attacker’s plan was to crash four planes into four vital locations of the U.S government but the fourth plane did not reach it’s mark. At 10:10 a.m. the fourth plane crashed into a field near Shanksville, Pennsylvania. The passengers aboard the plane managed to take over the aircraft for a limited amount of time and were able to steer it off course saving hundreds and maybe thousands of more lives but while sacrificing their own.

Many members of the Lincoln High community know what it is like to be alive during a terrorist attack. Most people know exactly what they were doing and where they were when they found out that someone had flown a plane into The World Trade Center. When I talk to adults about this tragic event I can see the pain and suffering in their eyes. “One of my classmates suggested we pray. So as a class (regardless of religion), sat together, and prayed. To this day, this experience brings tears to my eyes,” said Jennifer Trousch a teacher here at Lincoln High