Four hurricanes in two months? Who is to blame? 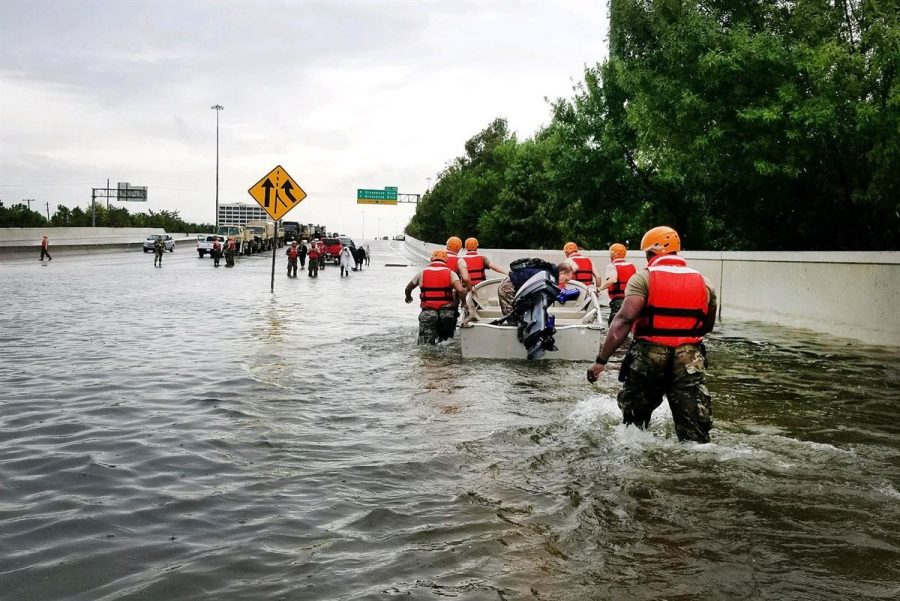 Imagine, everything that you used to get ready this morning is trapped under the roof of your house. Imagine, water rushing through gigantic cracks running through the walls, creeping up and ruining your favorite poster.

This may sound like a freakish nightmare, but it is actually a very real situation for the people who have been affected by the recent hurricanes that ravaged the Atlantic seaboard.

On August 30, 2017, Hurricane Irma formed and proceeded to grow. It has now been recorded as the strongest storm outside of the Gulf of Mexico or the Caribbean Sea, as well as the 11th most intense hurricane on record in the Atlantic. But this wasn’t the end.

Two more hurricanes have followed suit. Hurricane Jose, a category 4 storm,  was the third storm to affect the mainland of the United States this year. Hurricane Maria has been on a path of fluctuation between category 3 and 5.

Storms like these cause devastation everywhere, including areas that can’t be reached by such dangerous winds. Even in Nebraska people are feeling the affects of these hurricanes. Including Lincoln High School’s choir director, Katherine Simpson.

Simpson has three children, all of whom live in Florida. One could only imagine the fear she felt when she learned that her kids were in active hurricane territory. Her kids had lost all the power in their homes, and therefore had to limit theircommunication with her.

“I was very nervous, we did a lot of text

ing back and forth but we couldn’t waste their battery,” Simpson said. “So, there were times where we couldn’t talk to them, and were watching it on the news and the news made it look horrifying.”

Thankfully, all of Simpson’s children survived the storm, and have safely returned to their normal lives. However, most people aren’t as fortunate as Simpson’s children. Currently, all of Puerto Rico is out of power, and is struggling to get aid from the united States.

“We are dying, and you are killing us with the inefficiency and the bureaucracy,” San Juan Mayor Carmen Yulín Cruz said Friday at a news conference.

These hurricanes are causing extreme devastation, and in order to prevent another influx of hurricanes it is important to understand why they are increasing now.

On their website, National Geographic explains exactly how hurricanes are formed.

“Every year, coastal regions brace themselves for violent windstorms known as hurricanes. But how do these storms form and grow? The oversimplified answer: Warm ocean water plus the Earth’s eastward rotation.”

The Geophysical Fluid Dynamics Laboratory elaborates that human activity contributes to the intensity and frequency of storms, such as tropical cyclones, typhoons, and hurricanes.

“By the end of the 21st century, [human activity] will likely cause tropical cyclones to be more intense on average by 2% to 11%,” GFDL states.

“There are better than even odds that [human activity] over the next century will lead to an increase in the occurrence of very intense tropical cyclones,” they added.

Human activity, in this context, is anything that a person does that affects the climate. Examples of human activity, such as driving a car, or trash accumulation are major contributors to the health of the environment. However, there are ways to help the environment. “[recycling] Helps sustain the environment for future generations and helps create new well-paying jobs in the recycling and manufacturing industries in the United States.” The Environmental Protection Agency states.

The evidence that human activity is directly affecting tropical cyclones is overwhelming. However, a small group of conservative commentators and climate change deniers claim that this evidence is false. These people choose to ignore the staggering amounts of scientific evidence and are therefore creating a naive view of climate change.

NASA Global Climate Change states, “Multiple studies published in peer-reviewed scientific journals show that 97 percent or more of actively publishing climate scientists agree: Climate-warming trends over the past century are extremely likely due to human activities. In addition, most of the leading scientific organizations worldwide have issued public statements endorsing this position.”

With evidence like this, it is obvious that the scientific community believes that humans have a large effect on the frequency and intensity of tropical cyclones. Therefore we need to take the advice of 97% of the scientific community and discontinue exploiting the Earth’s resources without expecting severe consequences. It is time that we put our differences behind us and began accepting that we are to blame.