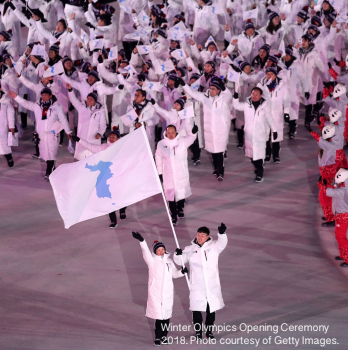 With the new US administration and the ongoing tensions between us and North Korea, their affairs have risen to high profile news.

Since the Korean war, North Korea and South Korea have been  anything but united. The countries first separated in 1945 which ended the 35 year Japanese rule. Russia took the side of the North and appointed Kim Il-sung.

The United States took the side of the South and with UN supervision, held elections that ended up with Syngman Rhee as the new leader. The first record of the leaders meeting for talk of reunification was in 1971, when the two leaders set the standards in which reunification would be available for the two countries.

According to the July 4 South-North Joint Communique, those standards would be through independent efforts of the two Koreas, peaceful means, and the promotion of national unity transcending differences in ideologies and systems. So far these circumstances have never been viable.

With the 2018 Winter Olympics, new signs of unification has surfaced. This year both of the Koreas attended the Winter Olympics in Pyeongchang together. Just about 230 cheerleaders and supporters were transported from the North to show spirit and support for their teams.

The countries decided to create a joint women’s ice hockey team, but the most noticeable display of temporary unification was their decision to march together in the opening ceremony under a unified flag. Although this is rare, it is not the first time the countries have shown unity. First, in 1991 they did this at the World Table Tennis Championships and most recently at the 2006 Winter Games in Turin, Italy.

It would be obvious for speculations to occur regarding the countries’ reunification. Based on the countries’ past, it seems to be highly improbable. The olympics are viewed as an event that brings countries together, a peaceful sporting event. So, we are forced to ask the question, Why is North Korea choosing to get involved now? What is the ulterior motive, if there is one? On February 8, North Korea staged one of their infamous military parades on the eve of the olympics. While the did have a solid excuse, it being the 70th anniversary of a big event, it was obvious for other countries to make some sort of conjecture of their motives.

The anniversary the country was celebrating, was their 70th anniversary of the establishment of their military. They showcased, among other festivities, four Hwasong-15, Hwasong-14, and Hwasong-12 ballistic missiles on their Transport Elevator Launchers.

The Hwasong-15 missiles made their debut last year in November, and with their arrival Washington DC was put on the theoretical map of places that can be hit. July of 2017, both the Hwasong-15 and another missile were tested and found of a range of over 13,000km, which would put the entire US at risk.

Aside from US tensions with the North, Japan and South Korea are experiencing their own fear and intimidation from the North. The capital of South Korea, Seoul, has over 10 million citizens just in the city. They are well within the brink of North Korea’s artillery range, where they are displayed in the South’s view.

Although military action involving nuclear warfare with the North has been a hot-topic issue, we can still be confident in our country’s military. Although North Korea’s army is one of the largest militaries in the world with 200,000 troops, most of their actual equipment is old and incapable of doing great damage.

With the Winter Olympics in mind, it makes us wonder if this small sign of peace shown from North Korea, unifying with the South and participating civilly in sporting events, is a sign of a diminishing nuclear program or peace and reunification with other countries? CBC news has quoted the ideas for the Olympics saying, “Olympics open door for reunification.” and  “An olympic miracle: is Korean unification in the cards?” said the Maclean.

But according to The Guardian,” Pyongyang has no intention of giving up its nuclear programme, as Washington demands. Although it has in the past committed itself to peaceful reunification, no one believes it is willing to change in the way that it would be needed. The real issue is that the doomsday clock is ticking closer to midnight since the election of Donald Trump – and any attempt to halt the hands is welcome.”

Rather than focus on the politics or hidden meanings of the event, we should focus on the main purpose of the Olympics which is to, “contribute to building a peaceful and better world by educating youth through sport practiced without discrimination of any kind and in the Olympic spirit, which requires mutual understanding with a spirit of friendship, and solidarity.”